Drawing on over 30 years of his first hand research into the mysteries of the Manson case, author, musician and filmmaker Nikolas Schreck, author of The Manson File: Myth and Reality of an Outlaw Shaman, director of the film Charles Manson Superstar and a friend of Charles Manson since the 1980s reveals that the mainstream media narrative about Manson and the crimes he was convicted of masterminding was a cover-up to conceal the secret sex lives, drug dealing and organized crime connections of the Hollywood elite.

Refuting the popular media-created fairy tales about hypnosis, Satanism, race war, and the Beatles, Schreck details the previously hidden extent of Manson’s support from the LA music industry, the true nature of the crimes, and his own direct contact with Manson and many others connected to the case. Schreck provided a thought-provoking analysis of the way corrupt law enforcement, Hollywood, and the media conspired to hide the truth from the public. An especially timely discussion during a time when the true face of the Hollywood movie industry has been exposed by the Weinstein scandal, Schreck’s lecture will be more than an investigation of true crime. This talk explores the clandestine machinery that creates the consensus reality fed to the public.

Singer-songwriter, author and film-maker Nikolas Schreck’s initiatory application of music, ritual and theater formally began in 1984 when he returned to the West from a life-changing spiritual pilgrimage in Egypt to found the shapeshifting musical ensemble Radio Werewolf, a nine-year sonic magic operation which concluded in 1993. After pioneering early Los Angeles Gothic and deathrock with the band’s first incarnation, Radio Werewolf’s European phase was hailed by Christopher Walton of the band Endura for “simultaneously pre-empting and giving birth to the dark-ambient and ritual-industrial scene of the 1990’s.” Before embarking on his current solo career, Schreck has previously collaborated musically with Zeena, John Murphy, Kingdom of Heaven and Sir Christopher Lee, whose first album he produced. Schreck’s books include The Manson File: Myth & Reality of an Outlaw Shaman, Demons of the Flesh: The Complete Guide to Left-Hand Path Sex Magic (written with Zeena Schreck), The Satanic Screen, and Flowers from Hell. He is the director of the 1989 documentary Charles Manson Superstar, and has appeared in several films, including Mortuary Academy and Usher. His new recording The Futura Model, the first single from a forthcoming album, was recently released on The Epicurean label.

One reason why I support Nikolas Schreck’s book so much is long before his great TLB bible called The Manson File – Myth And Reality Of An Outlaw Shaman (and I am not even going to plug the book here with a link because it’s that damn good and doesn’t need it) I began going down the drug burn theory road and Schreck’s book and other information helped keep me as sane as possible along the way by confirming what I was finding from police reports and official documents.

While I am always open to any logical theory I lean to the drug burn because where there’s smoke there’s usually fire.

Here is some of the smoke I see from my own discoveries.

UNDER DRUG BURN THEORY: Some Facts and Factors

Lets start with the possibility that drugs were being dealt out of Cielo:

FBI Report says a shipment of “household goods” left England bound for LA and was
consigned to Voytek (and Roman).

This shipment was also suspected of containing drugs and US Customs was advised.
Source: FBI Report 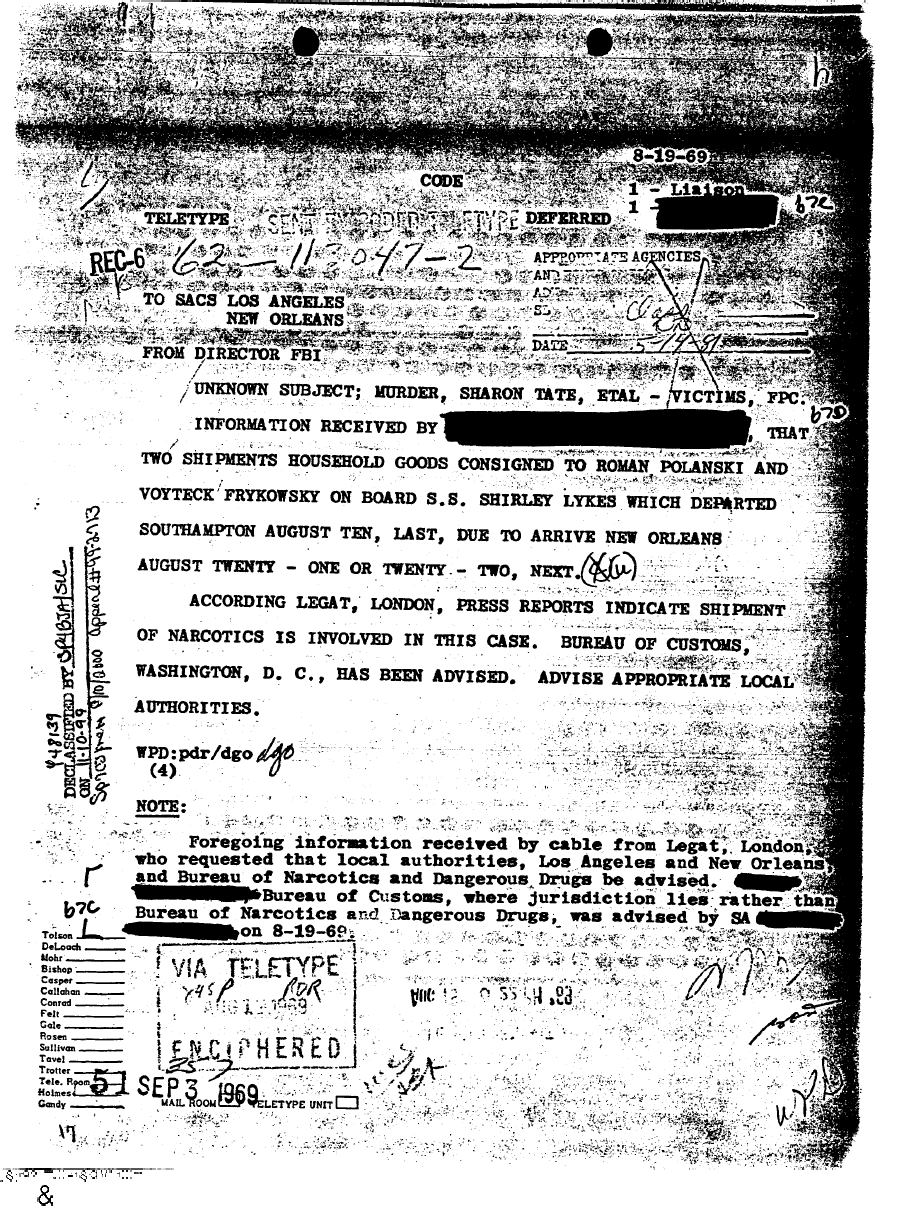 The Second Tate Homicide report has McCaffery informing police that Rostau was at Cielo
the day of the murders delivering drugs.

Right there are two pieces of seemingly solid evidence of drug dealing going out of Cielo.